Adventure in the purest form

Solunska Glava is the Highest Peak on Jakupica mountain, very remote place, hard to reach seating at 2540 ASL. It is said that you can see Thessaloniki from here on a high visibility day and thrust me it was nothing like I have ever seen.

We were all at the rendezvous point way before 5:30AM, that does not happen, ever, even when we are meeting at 11AM. You could tell that the excitement was at a very high level and we all knew it is going to be a big adventure.

We teamed up with Eskimo-freeride, they organize cat-car skiing in Macedonia and we arranged a ride on their cat-car. There were no place that this machine would not go and in the hands of our Tandem Pilot, Sky-Diving instructor, Driver, Pilot and what not Smote, we had the mountain for our-self.

After a few hours ride in the middle of nowhere we reached the top. Stepping outside of the cat-car was more or less like setting the first steps on the moon, this big mountain landscape was demonstrating how small and insignificant we are.

We came here for flying, so we quickly looked for a take-off site. There was a head wind but it was bit too strong so on this never flown place before, a completely new territory, we decided to wait. The cat-car had to go down to a village 2h of riding from the top to pick up skiers so Smile and Dzoka used this rare opportunity to put the first lines on the mountain. Me, not being a good enough skier, I had to watch and wait for my part to began.

We met the skiers, 9 of them, and started our ascend.

Immediately  after arrival we could tell the wind has calmed down and now we are about to fly. The part that we had problem with was a really not flyable looking valley. We set in the landing point on our GPS and it said 12km to the retrieve viechle. There was no way we could reach it and there was no way that we are not going to take off from this place. It was a strange filling, we all new what was about to happen but we all agreed, we were to week to resist, we all felt it “The mountains were calling and we had to go.” 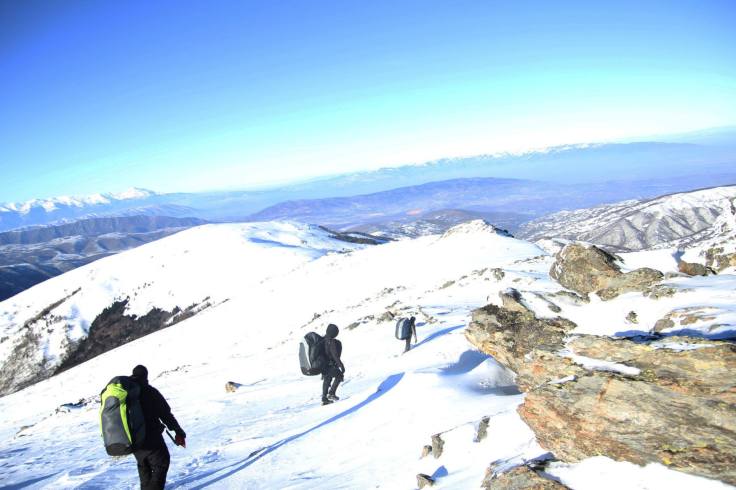 We switched our plan A with our plan B, lend where ever the first guy lends. We set up and did the most beautiful synchronized take off I can remember. Every one took of in under a minute. Once we were in the air it was all down hill from here. We were dogging mountains, ridges and threes, like literally flying 3 feet from trees. From 30 seconds in the air it was survival mode for everyone. However we managed to have this “out of control situation” as much in control as possible. Pero, Alek, Dima and Dzoka landed in a remote village in the middle of nowhere, while I landed on the other side of the valley due to flying a bad line. Smile however landed in another village to the north. 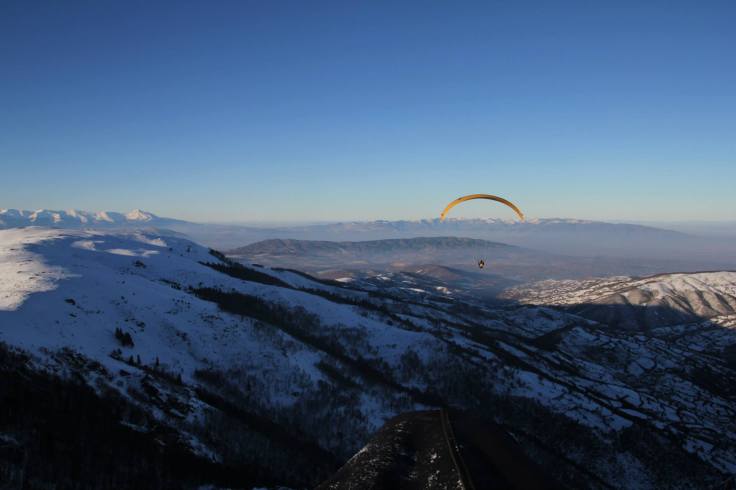 As soon as I landed it was obvious that the big adventure we had up to this point was only going to get bigger. I packed my gear fastest I ever did and set on to find the way to the other side of the valley. I find a route and followed it for 15-20 min. It was the fastest way to the group but there was a river on the bottom of the valley. In a blink of an eye all the episodes of Ultimate Survivor came to my mind. Then I ignored everything Bear Grylls had to say and crossed the small river with my shoes on. Now I knew it, there was no stopping until we reach the car and it did not matter if it is 15 minutes or 5 hours away.

I regrouped with the others and we set foot on the only road down the mountain. We walked for 2 hours with our socked gear in total darkness with a sky full of stars over our head and demonstrated a great team spirit. There was not one moment where there was tension or demotivation, it was the greatest adventure we’ve had for some time now and no one was going to take this away from us.

Eventually got to the car and even made it to go for a beer back in the civilization.

About my flying I can say that this was pure luck, If the wind was stronger there would be to much turbulence and who knows what. I picked a very bad line, did a lot of flying on the lee side and eventually lost height more than the others. However I am happy with all the other decisions that I made, in my opinion I made the safest decisions I could even if it meant navigating and hiking in the middle of nowhere.

At the end no one got injured, we demonstrated a great team work in a real life emergency situation and managed it with no problem. If I had to be stuck somewhere, I would love to be stuck with this guys any where, any time.

PS. All photos are taken by Alek Pejoski and there are 210 other in our Gallery